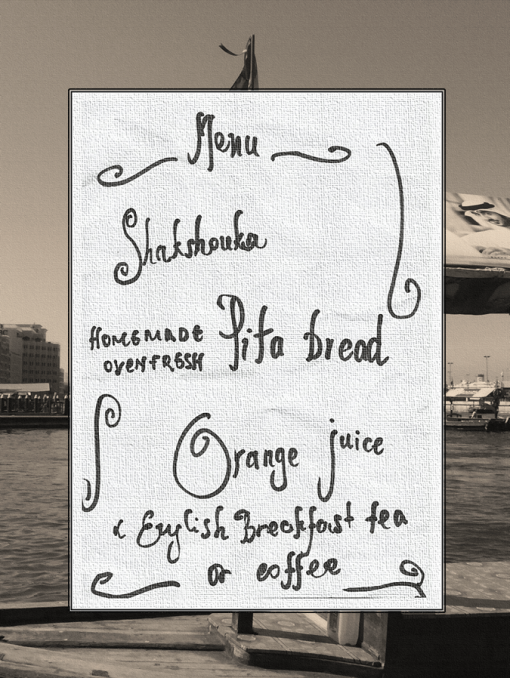 We are already into March and here I am writing my first post for this year. It has been a busy few months… along with the usual suspects of work, six year old starting school after the Christmas break etc. etc. I have just taken up an exciting new project, and the icing on this cake is that it has something (if not everything) to do with food! More on that later.

It would be an understatement to say that it’s my favourite meal of the day, although it’s a rare, twice-in-a-week indulgence. On weekdays it’s just eggs on toast, a Sri Lankan hopper (a rice pancake) or the extra bits and bobs from my son’s packed school lunch, and not being the punctual type I’m always running out of time (I’m a bit of a night owl, though it may contradict my obsession with breakfast), so these are just wolfed down along with my morning coffee.

A few weekends ago, my husband and I and our six year old popped by the Creekside café by the Dubai creek for breakfast. The café does not talk much about their food – their focus is more on creating a cultural hub of sorts for tourists and residents alike, basically anyone who would like to get a taste of the arts, culture, music and such likes, in a very contemporary yet traditional setting.  I usually don’t write about restaurants I eat at (I might also add that we paid for our meal) but the food there was so good that I just had to gush about it somewhere (and I don’t seem to be the only one in love with Creekside café, check out this wonderful review by IshitaUnblogged  which appeared in her Hidden Gems of Dubai series).

Perched right along the bank flanking the busy creek, the café blends in so well with the surrounding buildings of old Dubai with stone washed walls and a massive wooden brass studded door which is kept open with the help of what looked like an old gas-cylinder-turned-door-stopper. Huge umbrellas and rickety metal chairs and tables are set up outside, the setting reminiscent of a street side café in Paris, and a couple of waiters in black aprons and big smiles wait at the doorsteps to take in the orders.

You need to park your car and walk a few kilometres through the labyrinth of the Dubai souk to get to the café – a walk I would not complain about – the quaint little shops selling rainbow pashminas, spices and Turkish lamps lining the sides of the narrow lanes are a real feast for the senses. Having been living in Dubai for over nine years, it’s a pity I rarely visit this part of town….to think what I’ve been missing! 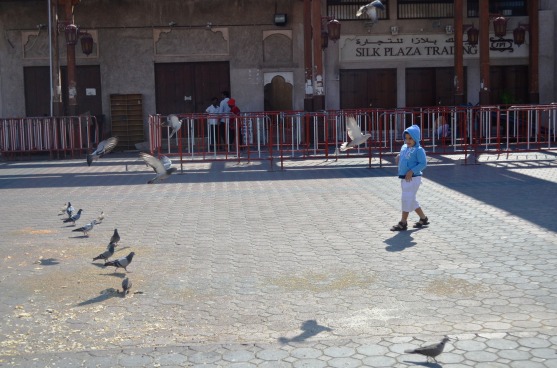 The glorious weather and the equally glorious (if not better) view prompted us to sit outside. There was a cold wind blowing but the English breakfast tea we ordered came to the rescue, and pretty fast too. It was just wonderful to sit there holding warm cups of tea in our hands and watch the almost chaotic but beautiful scene of colourful abras chock-full of people floating by and screaming gulls swooping into the water to catch an unsuspecting fish.

The food took rather long to come but it did not disappoint. The highlight of the meal for me was the shakshouka which they call ‘Posh Beith Temath’; two poached eggs in a delicately flavoured tomato sauce with swirls of creamy yoghurt, a sprinkling of chopped parsley and a golden lump of butter melting right in the middle and a plate of little triangles of crisp homemade pita bread to mop up all that deliciousness. The egg yolk was a bit overcooked and didn’t ooze out when I prodded it apart with the fork, as you would expect from a poached egg. So sadly there was no dunking the little pitas in egg yolk, but the dish in its entirety was ridiculously delicious!

Hubs had the Creekside breakfast sandwich (another lovely creation of corn-beef hash patties and scrambled eggs on a fresh muffin with a lovely little sauce drizzled over it) while six year old had a bowl of fries and the crème brûlée which came with a crunchy pistachio biscotti on the side; a weird combo for breakfast but being the weekend I let him indulge a bit, and I took bites of everything, of course!

A couple of weekends later, I woke up craving shakshouka or shakshuka – however you spell it, it’s got me trapped in its tomatoey, eggy concoction of sunshine and happiness. The chilly morning breeze (which sadly won’t last long) was whispering in my ear ‘Shakshouka, shakshoukaaa, shakshooooooukaaaaa……!’– I just had to try and recreate the dish at home, challenge myself and make everything from scratch, including the pita bread!

And it all turned out…perfect.

adapted from a recipe from King Arthur Flour

This was my first attempt at making pita bread but this recipe was so easy to follow and the results were absolutely amazing!

Combine all of the ingredients, mixing to form a dough dough. Knead the dough by hand for 10 minutes. Place the dough in a lightly greased bowl, and allow it to rest for 1 hour- it will become puffy (but won’t double in size).

Turn the dough onto a lightly oiled work surface and divide it into 8 pieces.

Roll two to four of the pieces into 6″ circles (the number of pieces depends on how many rolled-out pieces at a time can fit on your baking sheet).

Place the circles on a lightly greased baking sheet and allow them to rest, uncovered, for 15 minutes, while you preheat your oven to 500°F. Keep the unrolled pieces of dough covered – this is very important as I left mine uncovered and they didn’t puff as much as the first batch I baked. Roll out the next batch while the first batch bakes.

Place the baking sheet on the lowest rack in your oven, and bake the pitas for 5 minutes; they should puff up. (If they haven’t puffed up, wait a minute or so longer. If they still haven’t puffed, your oven isn’t hot enough; raise the heat for the next batch.)

Transfer the baking sheet to your oven’s middle-to-top rack and bake for an additional 2 minutes, or until the pitas have browned.

Remove the pitas from the oven, wrap them in a clean dishtowel (this keeps them soft), and repeat with the remaining dough.

Store cooled pitas in an airtight container or plastic bag.

Shakshouka
adapted from a recipe by Yotam Ottolenghi, inspired by Creekside’s version of the dish

I have shamelessly copied Creekside’s shakshouka, right down to the lashings of yoghurt and butter it was served with, and that’s just because theirs was so damn good! 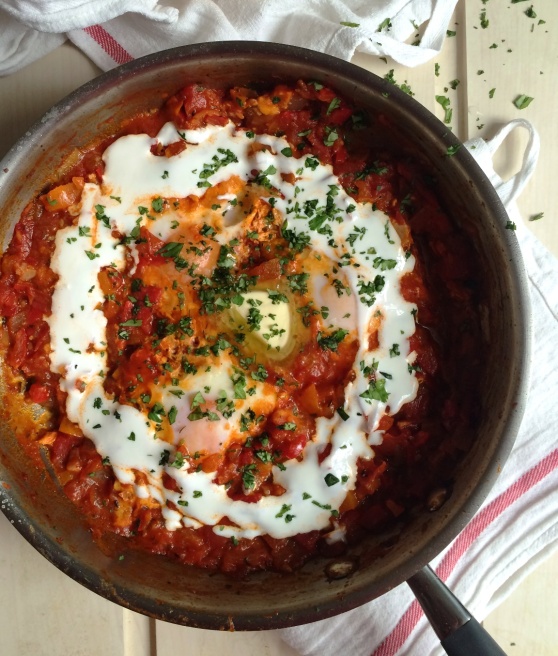 In a heavy bottomed large pan dry-roast the cumin seeds on a high heat for 2 minutes. Heat the oil and add the onions. Fry gently till onions begin to soften. Add garlic and fry for a minute longer.  Next add the peppers and herbs and continue cooking on a high heat for 5-10 minutes.

Add the tomatoes, tomato paste, chilli powder, cumin, sugar, cayenne pepper, paprika, salt and pepper and simmer over a medium heat for 5-7 minutes. Add a little water to loosen the mixture so you get a sauce like consistency. Taste and adjust seasoning.

Make four holes in the mixture and carefully crack an egg into each, sprinkle with a little salt. Cook over a gentle heat for about 10-12 minutes till the eggs are set and the sauce is slightly reduced (if you want the yolks to firm up cover the pan with a lid and cook for a further few minutes).

Serve hot with a drizzle of whipped yoghurt (I used whipped labneh), a scattering of chopped parsley or coriander and a generous pat of butter over the top, along with some pita bread to mop up everything! 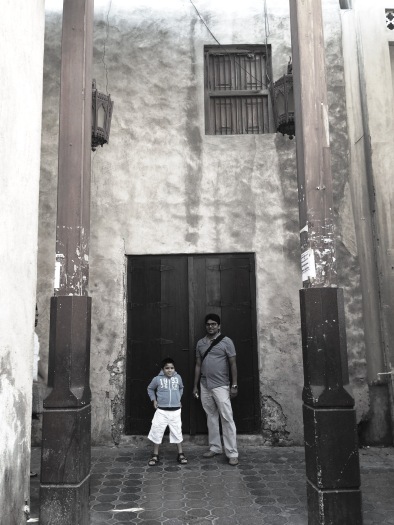 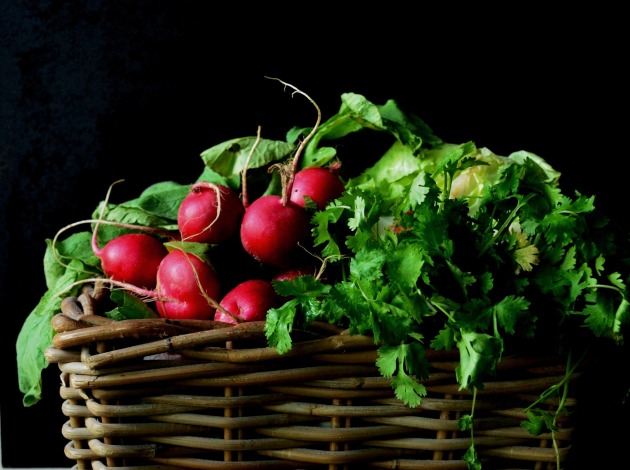 Having been born and raised in Sri Lanka, a country abundant in all things green (think of lush verdant forests, tree-canopied foot paths, blue mountains, endless paddy fields… I can go on forever..) it took me a while to get used to the flat, sand-hued landscape of Dubai. I love the green stuff, so much so that when I was a kid I used to imagine myself living in a flower-bed. For someone with this kind of ‘green’ obsession, like me, a visit to the local park is always a treat, especially when there is a bonus thrown in (which you shall soon find out)! 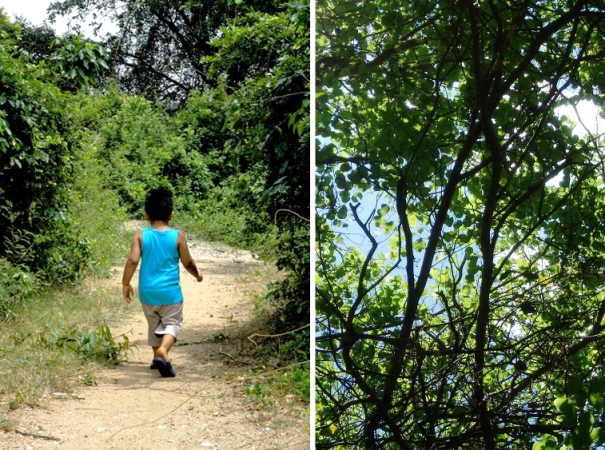 The parks in Dubai are beautiful – little emerald oases where one can escape the hustle and bustle of the city. The mercury drops towards November (it used to be as early as August – effects of global warming methinks?) and the temperatures remain a pleasant 18-23 degrees till mid-April. The moment Dubai bids goodbye to the hot desert sun, out come the BBQ grills, the beach towels, the bicycles, the picnic blankets and my most recent finding – farmers’ markets. They sprout all over the city in various places – from parks to hotel gardens to more spectacular spots like the Dubai fountains. From delicious baked goods from artisan bakers to fresh veg and fruit from local farms, these markets have something for everyone and are a foodie’s paradise.

Last weekend I paid a visit to the Foodie Friday Market in Safa park (it’s hosted by Ripe, an organic food store in Dubai). The park itself is one of the most beautiful in Dubai, complete with sprawling lawns, a pine grove and even a duck pond! For those who live here, the market is near Gate No. 5 and is held every Friday from 9 in the morning till 2 in the afternoon.

A mélange of delightful sights, sounds and smells welcome you as you walk towards the market…the aroma of sizzling burgers and pancakes wafts through the air making your mouth water and breezy tunes from a solo guitar dance their way into your ears while little orange, green and white flags flutter overhead.

We spent hours browsing around the stalls sampling delicious titbits – from juicy sausages and crusty bread to freshly squeezed lemonade and gooey brownies. I also bought this beautiful bunch of organic and locally grown radishes from the Ripe stall (they were so gorgeous that I wrote them a little poem). For lunch that day I made a simple radish salad which tasted amazing and oh-so-fresh! They say food tastes better when you know where it came from and who grew it, well I couldn’t agree more.

Add the lemon zest into a large bowl. Pour olive oil over the top. Leave to sit about 15 minutes or up to 2 hours for the lemon zest to infuse the oil.

Just before serving toss arugula into the oil and zest mixture and toss gently with your hands. Allow each leaf to become coated with the oil. Add more oil if necessary, do not overdress. A coating is all that’s needed. Sprinkle on the lemon juice, gently tossing. Season with salt and pepper. Give another toss and then pick up a leaf and taste. Add more lemon juice if required.

Scatter over the radishes and apple. Using a vegetable peeler shave off curls of Parmesan and scatter liberally over the top of the salad and sprinkle over the crispy fried shallots. Serve at once. 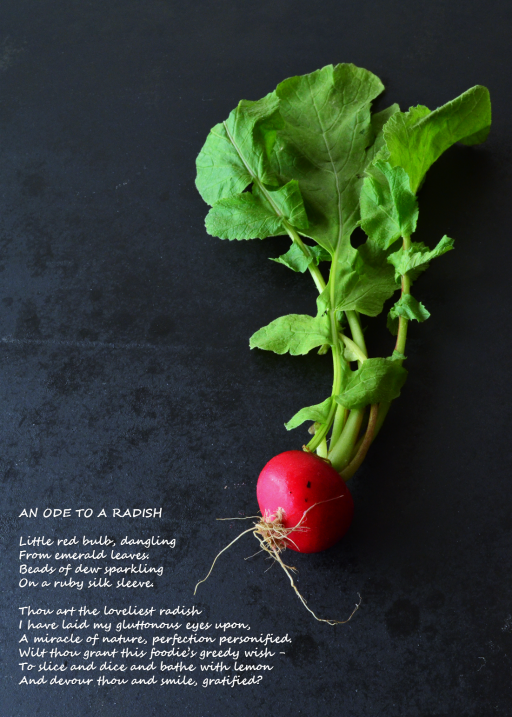