The sun has disappeared behind huge gray clouds and a bone-chilling wind lashes against our faces as we step out of the mini tour bus. Our guide Chris however grins from ear to ear and tells us we have an hour to lunch after which he will take us on a tour around the city (it’s optional of course!).

My eyes take in a panoramic view of the surroundings – rows of stately Georgian buildings in weathered shades of ochre, narrow cobblestone streets lined with charming little shops, an ornate steeple rising above blackened chimney tops, and in the distance, resembling a faded watercolour suspending from the sky, the breathtakingly beautiful Pulteney Bridge with the River Avon flowing gently beneath it. We are in Bath – a perfectly preserved time capsule of a bygone era… 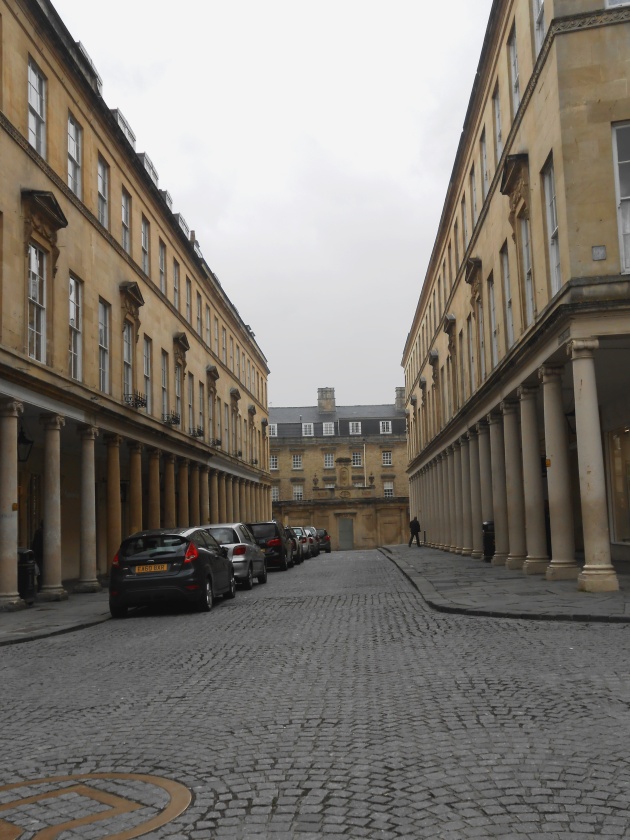 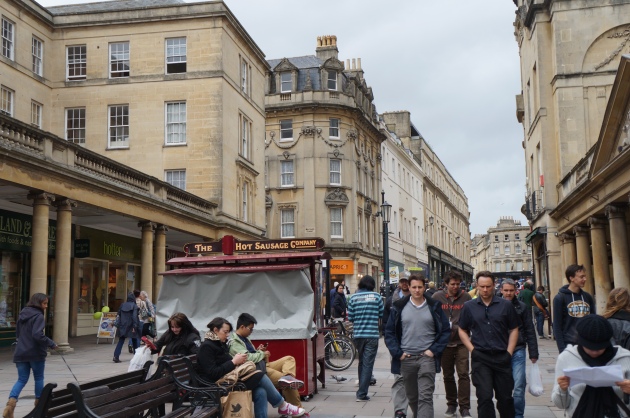 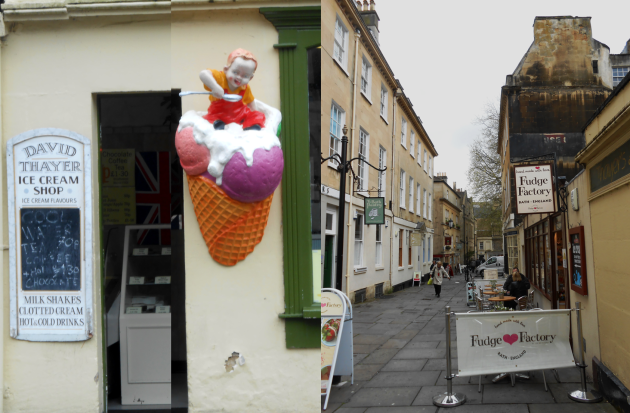 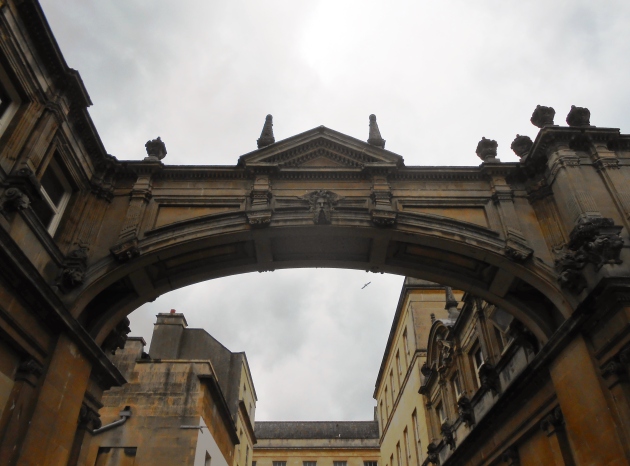 Around AD 60 the Romans built a temple and the baths which gave the city its fame and during the 18th century, or what is known as the Georgian period, it became a popular spa destination for the upper echelons of British society (an allusion often found in Austen’s novels). Bath was declared a World Heritage site in 1987 (possibly why those blackened chimney tops never got a fresh coat of paint- and hopefully never will!), making it one of just two cities in the world to be given this status.

We start exploring, cameras clicking non-stop, a trio of snap-happy tourists, marvelling at the old world charm of the city centre. However, having being born and raised in Dubai with all its glittering modernity and 365 days of warm weather, there is so much history and cold wind my two sisters-in-law can take, and restoratives are in order. You see, we were on one of our ‘mommy’s time out’ jaunts – a four day trip to London with a day tour to Stonehenge and Bath thrown in, and one of the must do items on our To Do list was to have an authentic pub experience.
So, following Chris’ recommendation we head towards the The Lamb & Lion which is close to the Roman Baths. But a few twists and turns along the way we stumble upon The West Gate (there seem to be a pub around every corner!). We find it hard to resist the warm glow which shines through its front windows and a few seconds later, we find ourselves sitting inside downing pints of Lilley’s Bee Sting pear cider and tucking into some amazing pub grub (that cider is to die for! Crisp, light and golden with delicious notes of sweet juicy pear, and pretty potent too!). 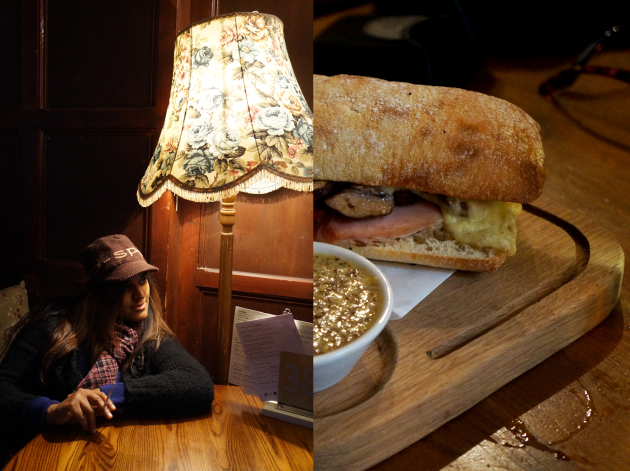 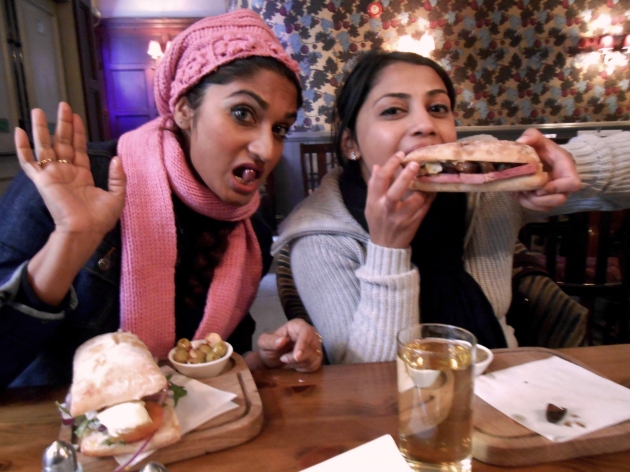 We have such a roar of a time that Chris’s instructions to meet in an hour becomes a distant echo in our woozy minds. In contrast to the cold, dreary streets outside, it is warm and cosy inside the pub with its overstuffed chairs, oak panelled walls and huge floral lamps effusing a deliciously mellow light, and of course that tall sparkling pint of pear cider…

So there we stay, drinking and eating and drinking some more…

Well in the end we missed the city tour (which was such a pity), had a quarrel with our guide, saw the magnificent Bath Abbey with its walls lined with the most romantic epitaphs dating all the way back to the 1700’s, popped in to see the Roman Baths and even managed to gulp down a glass of its healing (and vile-tasting) water which a restaurant overlooking the baths was generously giving out to all visitors, my sisters-in-law got lost (I was obliviously clicking my way back to the mini bus and lost them along the way, they took a wrong turn somewhere and ended up walking around in circles), made a quick stop at the awe-inspiring Royal Crescent and The Circus and caught a fleeting glimpse of the white front door of Jane Austen’s house, where she lived between 1801 and 1806, while heading back to London in the fading light of the evening. 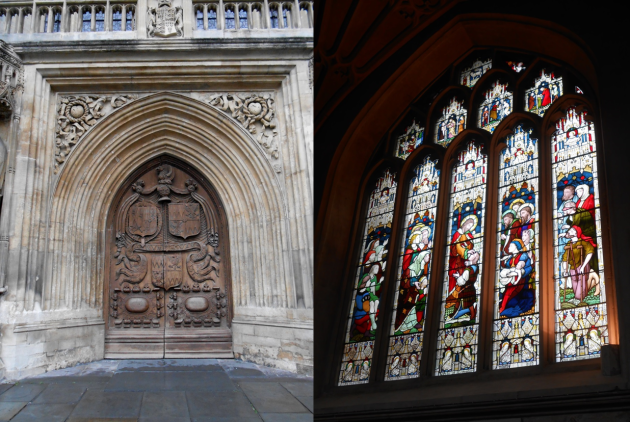 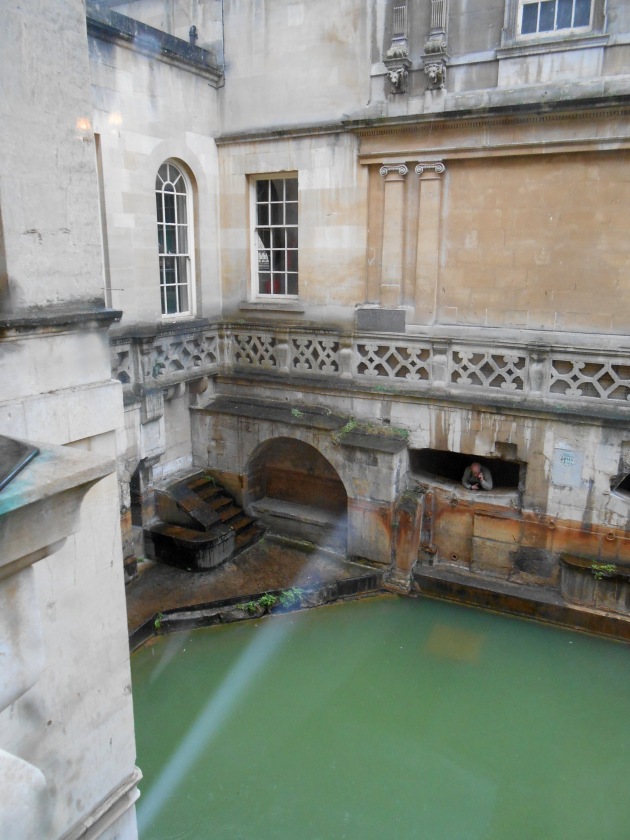 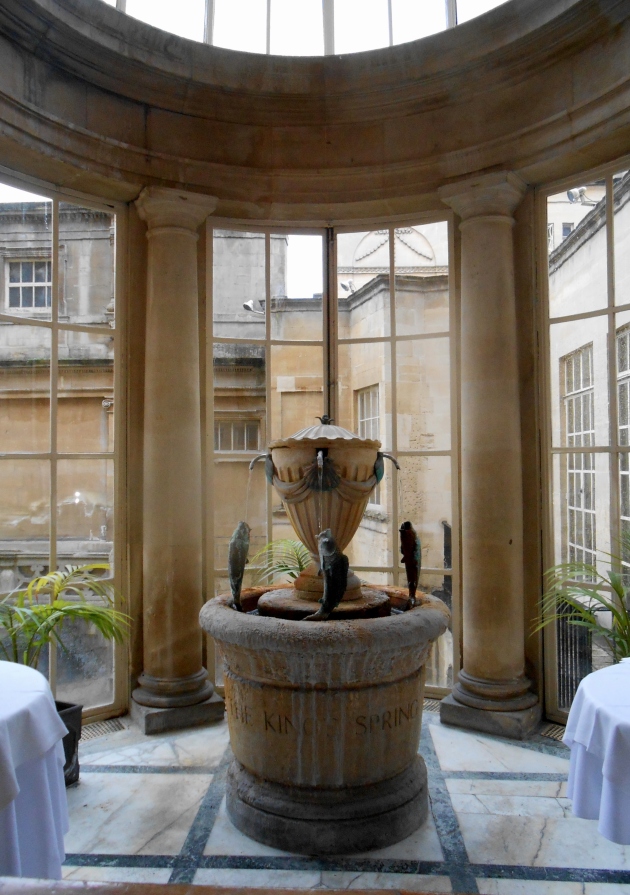 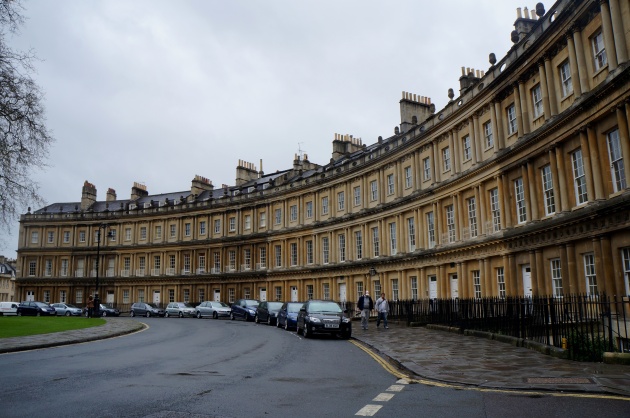 Glorious Bath! With its wonderful history and magnificent architecture! But what stands out most in my mind when I think back of our trip is the few hours we spent in that lovely little pub, feeling warm as toast and getting happy-high on pear cider. There is something very endearing about British pubs – the relaxing atmosphere, the history (each place has got its unique story), the unpretentiousness  – staying true to its name; a public house, the food, the ale and the cider (it really is to die for) – a 1000 year old tradition which has changed very little over the years. Rightly described as ‘the heart of England’ by Samuel Pepys in his diary, pubs are a fundamental part of the British culture and it’s sad to see this tradition slowly dying out with more and more pubs closing down each year in Britain.

Oh, and there is one more reason which makes our first ever pub experience that little bit extra special. I was doing some Google research on The West Gate for the purpose of this post when I found out that the pub dates back to 1611 when it was one of the original coaching inns in the city, and about Alice – its resident ghost. There is not much written about her but the fact we spent a few hours in a haunted pub gives me goose bumps, especially when I think of the time I visited the pub’s bathroom. It was down a narrow flight of steps and seemed like a re-purposed cellar with cold stone walls and pull chain toilets – I was the only living soul down there and while washing my hands I had this eerie feeling that someone was watching me…could it have been Alice? 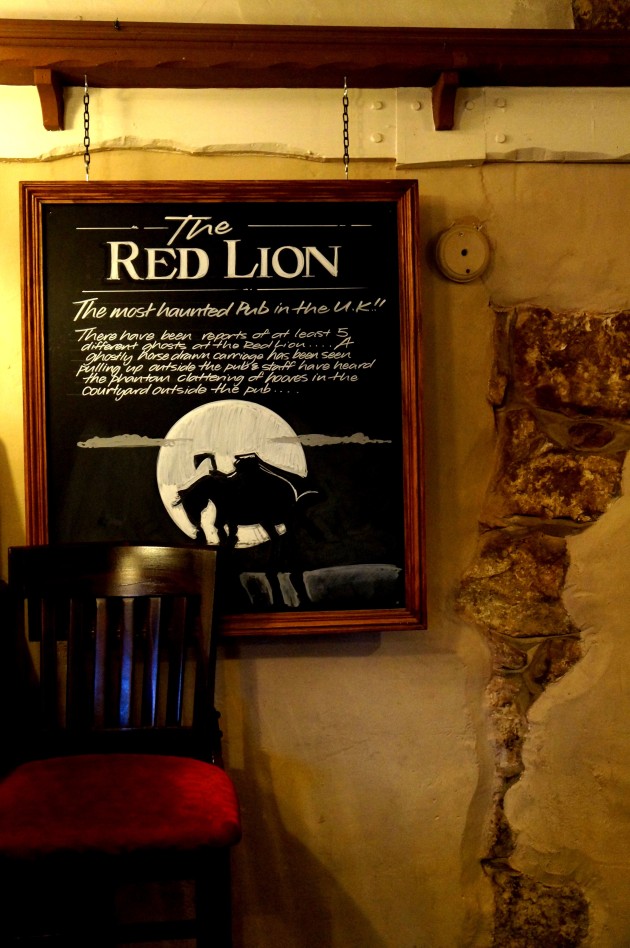 Paying homage to the wonderful pubs of Britain and Alice (may her soul rest in peace) I made the ultimate British pub classic – steak and ale pie (apparently The West Gate does a good one too). I was also waiting for an opportunity to use these lovely little enamel pie dishes which were sitting in the cupboard, brand spanking new and begging to be used.
My pie-tin lining and crust decorating skills may require some honing but it sure was a jolly good pie! 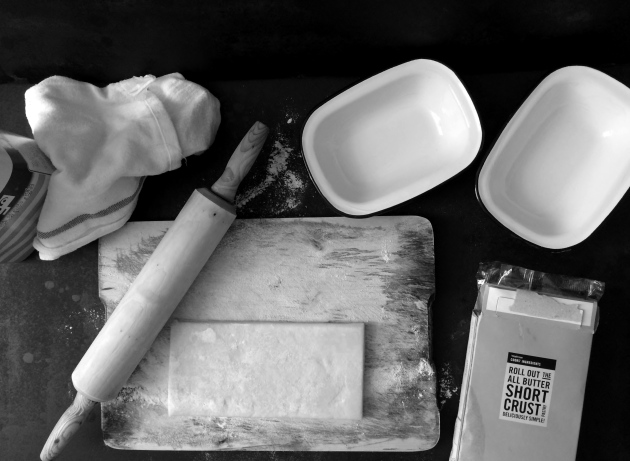 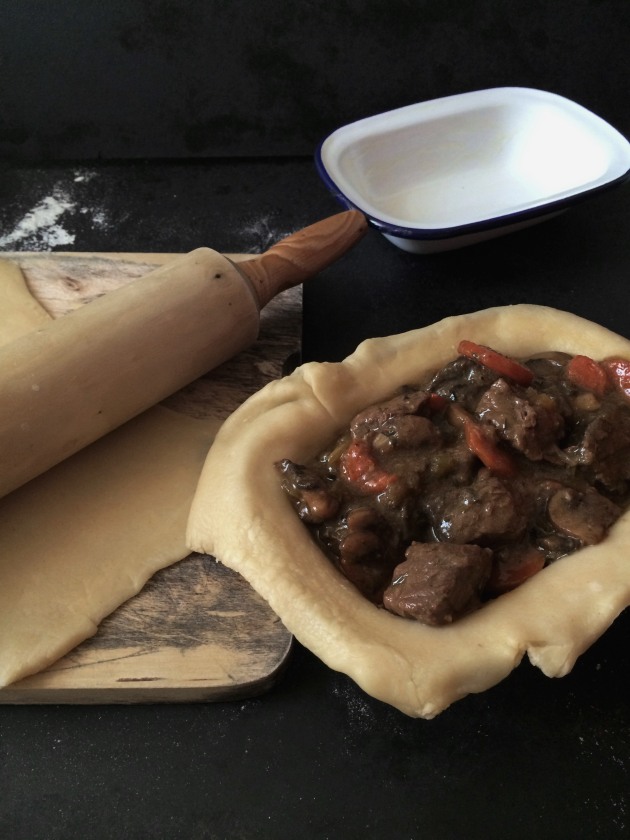 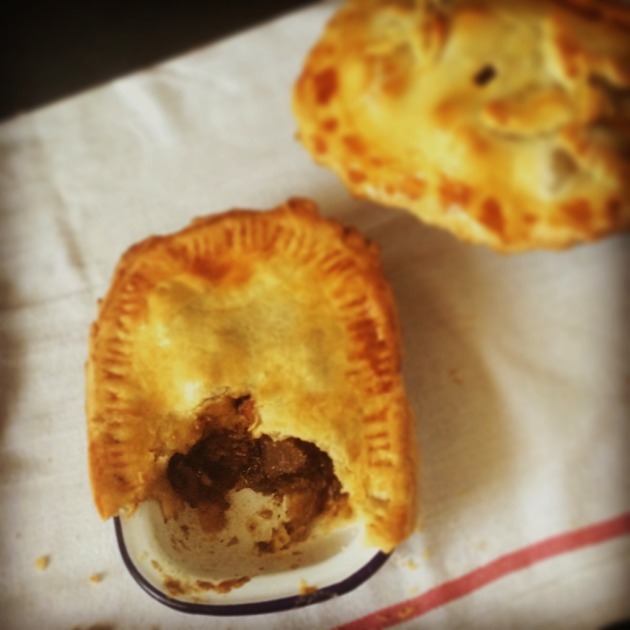 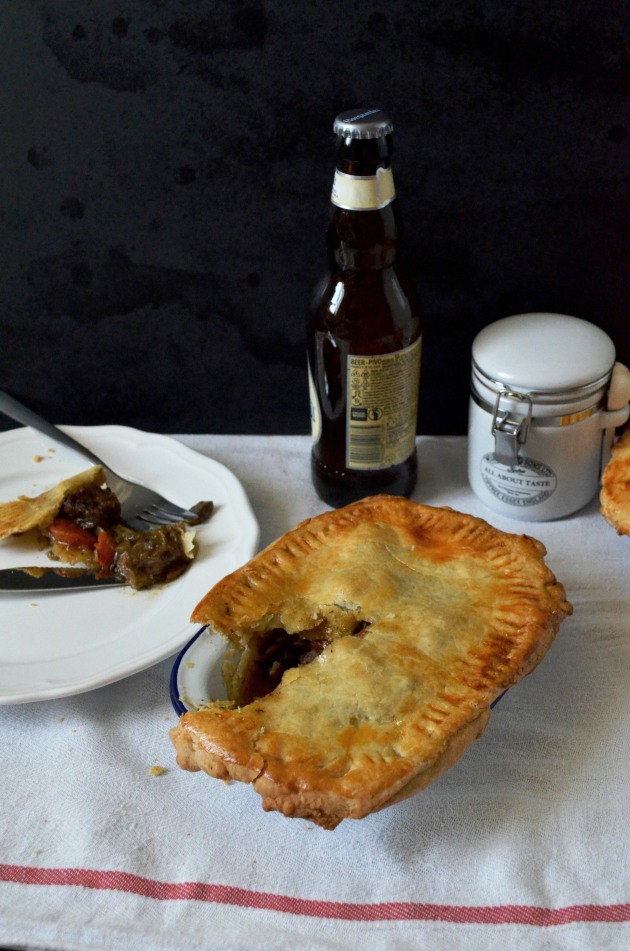 Heat oven to 160 C. Using a flame proof casserole dish with a lid, heat some of the olive oil and add the beef. Fry the beef cubes for a few minutes till they turn brown and set aside.

Lower the heat and add the remaining olive oil and butter. Add the onion and fry gently for about 10 minutes – try not to colour them too much. Turn up the heat and add the carrots and celery and scatter in the mushrooms. Stir in the flour until it has disappeared. Mix everything together before stirring in the beef and Worcestershire sauce. Crumble in stock cubes, add thyme and season well. Fry fast for 3 or 4 minutes, then pour in the ale, stir in the flour and add just enough water to cover. Bring to a simmer, then cover and cook in the oven for 2 1/2 hours. Remove lid and cook for another 30 mins – this should thicken the sauce nicely (we are looking for a rich, dark, robust stew).

Increase oven to 200 C. Roll out the pastry and use it to line a 20-22 cm pie dish (you can also use small, individual pie dishes). Spoon in the meat and pour over the sauce until the meat is just coated. Roll out the remaining pastry and use it to cover the pie. Using a small, sharp knife trim the edges and crimp with a fork to seal. Brush top of the pie with beaten egg. Bake for 30-40 minutes until golden brown and crisp.

If there is remaining sauce, reheat and serve with the pie along with mashed potatoes and peas.